Parading Oneself in Public – The Public Performance Lab

The Public Performance Lab was a 7 day workshop laboratory held at Natyalaya in Jaynagar, Bangalore, in which the Austrian choreographers and performers Georg Hobmeier and Mirjam Klebel offered a platform for knowledge exchange and research with strong focus on dance and performance for public spaces. This research was based around their previous works, a series called area.
http://www.openarea.at/
http://vimeo.com/channels/165152
area is a platform for the temporary transformation of public space. Projects connected to area are performative and/or choreographic actions, which emphasize and put into question the given social, architectural and political codes of a place. An area project may take the form of a specific performance, a set of choreographic actions before a (un)knowing public, or a mode of research carried out on a particular geographic zone. These actions are neither theater works that simply happen to take place in public, nor are they spontaneous events. area projects traverse the border between visible and invisible, directly and thoughtfully working to transform a given place. The result of such a project is a fluid and temporary space, in which the definitions between viewer and performer, between city and stageare continuously re-defined. 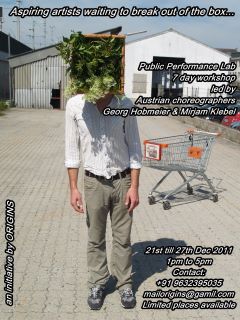 The workshop featured daily 4 hour sessions that began with a contemporary dance warmup led by Mirjam Klebel. Although most of the participants had prior experience in dance, we were challenged by her energy and strong technique that left us breathing hard but completely energized and rooting for more. Mirjam is a wonderful teacher and an extremely talented dancer, and it was a great pleasure to attend her classes. As one of the participants said, “This is one of the best sessions I’ve ever attended and it’s great to be able to be in a group and pursue this form.”
Short excerpt of the technique class with Mirjam
The next part of the session was the core work on public performance, led by Georg Hobmeier. Towering over all the participants, Georg soon put everyone at ease with his amazing sense of humour. The activities were focused on trying out physical scores, devising choreography, exercises in connection with physicality and presence in public space and discussions. These sessions were extremely hands on and took participants out of their comfort zones in the studio and into the streets of Jaynagar, . They involved exercises on walking and presence, site specific compositions, and following a series of pre-recorded instructions that were used in area.
Excerpt of a group piece in studio where participants followed recorded instructions audible to them through mp3 players and an external score was played for the audience.
More than one innocent by-stander was startled to see a participant run up and down the same street, wave at windows, and engage in a slow, meditative walk. Another session, involving site specific compositions, really engaged the public, with several people walking up to the participants and demanding to know more about what they were doing. One of this author’s favorite sessions was held in Lalbagh, where participants explored theatrics and performance in a completely different environment.
“This kind of work really puts you out there in a community and you can learn so much about the place that you’re in. A lot of the myths one tends to hold, about a city and its people, get debunked. Its extremely challenging as well, to put yourself out there,” reflected one of the participants.
A small glimpse into the Public Performance Lab is available at http://vimeo.com/36511735
For more information on performance art, visit http://en.wikipedia.org/wiki/Performance_art
Georg Hobmeier was born in . He works as a freelance performance artist Since 2000 he created numerous interdisciplinary projects bringing together artists from dance, digital music, architecture, theatre and visual art. His recent projects have been presented at ICA London, Cynetart Festival Dresden, Mellkweg Amsterdam and others. He currently travels through , while giving lectures, working on projects and teaching workshops, all in the realms of dance, performance and realtime media. He was a visiting director, lecturer and teacher at various reknowned institutions such as the RSAMD Glasgow, Folkwanghochschule Essen, Kunstakademie Nürnberg and others. His recent media project, the computer game „Frontiers“ has received extensive coverage in international media and is being exhibited in the ZKM in . He is an active member of the artist groups Gold Extra and works for several artists, companies and festivals as an advisor and dramaturg.
Mirjam Klebel is an Austrian freelance performer/choreographer, dancer and teacher who works throughout  and the . Coming from a background in dance, music and sports, Mirjam is also a member of the organizations TANZ_HOUSE Salzburg and SPIDER Collective where she is active in developing new agendas for contemporary dance with qualitative performative work as well as through different out-reach programmes and events that includes the audience in expanding ways. For example through the interface "Markier Dein Revier" and the Online Competition “MOVE AGAINST IT”. Since 2004 she is teaching at the University MOZARTEUM Salzburg for the dance- and acting department. Furthermore she is a teacher for professional training and workshops in , , Polen and at the  in . She has also worked for : Milli Bitterli, Lawiné Torren, Zoe Kights, Anna Tenta ,Matej Kejzar(SLO), VRUM Collective (HR), Mia Lawrence (USA), Martin Sonderkamp (G), LISA Collective (NL), Marina Rosenfeld (USA), Markus Hank (G), Simone Klebel-Pergmann (A) and Ori Flomin (USA).Adi Salant, Stephen Rappaport
and Georg Hobmeier
Posted by Origins at 2:21 AM