Erica visits and we dance again! 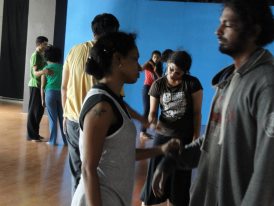 This past year I traveled to INDIA three times to teach, study, live, and experience the sounds
and sights of this extraordinary country. In BANGALORE, a city of some 8.5 million people
in the state of KARNATAKA, there is an artist revolution rumbling under the surface…ancient
stimuli inspiring new expressions. I find myself with the dance anarchists of Bangalore—
Kha, a collective contemporary dance group (Sanskrit for “Space”). They exude pride for their
various cultures and possess passion for more—alive and interacting with imagination and

brilliance. They are associated with Attakkalari Centre for Movement Arts, the premier dance
conservatory in southern India for classical and contemporary dance.

Attakkalari’s artistic director, Jayachandran Palazhy (Jay), explained his vision: “Our attempt
is to deconstruct some of the [Indian] folk traditions to understand the impulse that inspired the
forms. I am working with the principles and concepts rather than outer form—trying to imagine
the source.” When I asked him how he sees traditional influences within his contemporary work,
his response revealed an understanding of tradition as an evolving form rather than a constant to
be observed. “Remember…contemporary IS Indian.…India is a mosaic—a lot of give and take.
The idea of tradition is an artificial construct. Some people are afraid of change. But the only
constant is change. What kind of orientation do we want to have? How do we gravitate? Can we
evolve to a contemporary Indian confident enough to explore?”

I am in Bangalore to teach yoga and to conduct CI workshops for diploma students at Attakkalari
and to work with Kha, who arranged for me to teach a weeklong CI workshop for them and other
professional dancers at Kalari Academy of Performing Arts.

It is truly a cultural exchange. My interest in teaching CI in India is not to impose an aesthetic or
style of movement but to support an appetite for contemporary possibilities. I am fascinated to
see what happens with CI here, spiced by the local life and individual sensibilities.

In the studio with the professional dancers, trained in traditional classical dance and modern
forms, I feel the fertile rub between ancient and new. Many of us traveled far to participate.
One dancer traveled 5 hours by bus, another, who sells bananas on a cart in the day and dances
at night, traveled 10 hours via train. The intense interest is exciting and leads to dancing with
intelligent intrigue. Some have experience with CI, but others have never touched the opposite
sex outside of privacy. I assure them that they can dance man-to-man/woman-to-woman if less
distracting. But they want to try.

After my time in Bangalore, I went to CHENNAI, the capital city of 9 million people in the
state of TAMIL NADU. Chennai prides itself as a traditional society—nearly all women wear
saris, and many men dress in wrap skirts and bare feet. And yet again, I mingled and intertwined
in dance with the contemporary scene. Chandralekha’s legacy as a physically and verbally
articulate dance revolutionary is felt all over India. She utilized classical movements along
with yoga and Kalari (a South Indian martial art) to express nontraditional themes—eroticism,
feminism, abstract expression of energy. Before she died, she established a campus called
Spaces, and this is where I am teaching. Located near the beach, it is a haven for movement arts
in Chennai.

Local dancer and activist Andrea Jacob is committed to the cultural exchange and support of
contemporary dance in Chennai. She arranged my workshop at Chandralekha’s Spaces and an
interview with curator Sadanand Menon—a handsome man with a deep voice that vibrated
through me with every word. His love and respect for Chandralekha was clear. We sat on
marvelous house swings, reminiscing about her work and her continued influence and relevance
today. It was then that I learned Jay had been in Chandralekha’s company. I felt my dance travels
coming full circle—Chandralekha to Jay to Attakkalari to Kha.

Regardless of where on the globe or when, history tells the tales of revolutionaries. So often,
even artists become followers—CI dancers are not exempt from this—learning “the moves” and

perfecting them into the dance dialogue. Yet with new options and raw openings exposed, new
forms of expression, communication, and knowledge can blossom.

As a dancer, choreographer, and yogini, I have found my time in India to be incredibly
stimulating. I have traveled quite extensively in the world but am uniquely captivated by India’s
juxtaposing cultures of ancient and new, finding myself propelled into a wealth of interest and
ideas.

Not bound by past convention, I respect what has inspired traditions and embrace this as a source
of current investigation. What is tradition? It seems to me that even a culture such as India,
which theoretically embraces the fact of constant change in the material world, falls into the trap
of yearning for absolute answers and familiarities. It is part of the human domain to want to hold
on to traditions, treating them as though they have always been there. It is the creative mind that
disrupts habits of following. I find myself part of the wave of disruption, supported by love and
respect rather then revolt and denial.

And so, among the cows and chickens, mixed with bikes, motorcycles, rickshaws, pedestrians,
and incessant honking, I watch, listen, smell, taste, and feel my way into my next dance—
leaning, pressing, falling into the momentum of change.

-Erica Kaufman
Few pictures from the workshop (out on the streets)!