Improvisation into Performance with Lucy! - the beginning of Fluids.

Pretty much as soon as the kalari puja at the end of Navaratri was over (towards the end of October), I was on a train to Bangalore.  Those who’ve followed my adventures in the past may remember that I spent two months there last time I was in India, choreographing, performing and teaching.  It was time to put on my dancer’s hat once again.  I was off to teach a workshop for dancers and actors, which we decided to call “Improvisation into Performance".

On day one, in our opening circle, I asked the assembled group to share why they had come to the workshop.  The reasons were various, but one woman confided she found it hard to recall the movement material she’d improvised when trying to set it later.  She hoped the workshop might help.
I said it might, but that wasn’t what the aim of this sort of improvisation. 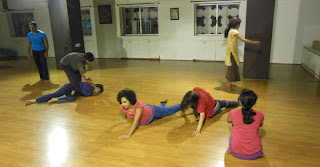 It was a lovely and diverse group assembled in a large studio on busy Miller’s Road (co-incidentally, the road I had lived by, albeit further out of town, during my last stay).  There were some extremely skilled and experienced contemporary dancers, others with various classical or folk Indian backgrounds (kathakali, kathak, chau, bharatanatyam), some who were coming back to dance after a break, salsa dancers, Bollywood dancers.  All seemed curious and hungry for new information.  My intention was to teach skills of contact improvisation and also work with improvisational scores that could include solo, duet and group work.  The idea of scored improvisation was new to most of them and their experience of contact was at best limited to a few occasional workshops, there being no regular, ongoing jams or CI classes in Bangalore. 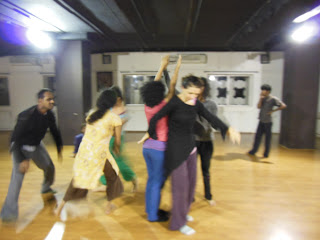 It seemed a no-brainer to introduce some of what I had been working on at Roehampton University in London last June during Nancy Stark-Smith’s Extended Underscore Workgroup (see here for a reminder about that). So the purpose wasn’t to help dancers remember what they do when they improvise, but to investigate the states and structures that allow improvisation itself to be performance, if or when we choose it to be so. 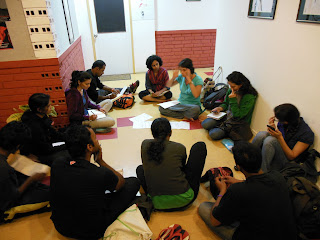 Time was limited, but we managed to use elements of the Underscore to teach and refine contact skills, working initially in pairs or trios to find release into gravity, release into touch, specificity in giving and receiving touch.  Mostly, the first half of the class was devoted to contact skills while the second half was given over to practising scores (for those not familiar with the idea, a score in dance improvisation functions a little like a musical score; it gives structures, rules, that hold and shape the improvisation). 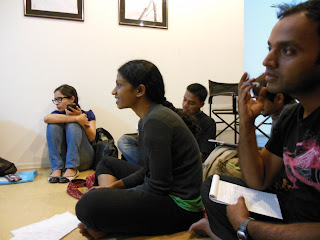 As the week progressed, it felt clearer and clearer that we should dance an Underscore – Bangalore’s first Underscore!  So we organised ourselves for the traditional talk-through of the various elements of the Underscore and then danced it during our two hour class the following evening. 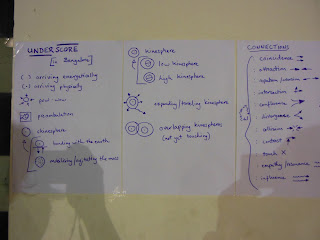 There was a cyclone in Chennai at the time, which played havoc with weather and roads in Bangalore, but nonetheless, most of the group made it to the studio for Bangalore's first Underscore, no mean feat in itself.
For more pictures than this blog entry shows, please visit my “Bangalore’s First Underscore” Facebook album.
Each time I have worked with dancers in India, I have been reminded of what is so precious and life-affirming and challenging about the kind of dance I do, and why I love to share it. This was no exception. But in the end, I prefer to allow some of the participants to articulate their experience for themselves.
Shiv Kumar shared this in a note on Facebook:

I do not want to list the activities or how it went about during the week, but I want to definitely share that we began with doing something very basic and from the ‘ground’ level quite literally. Connecting to the ground beneath not just my feet, but connecting the whole body to earth and your partner and letting the earth receive and give energy to you is a very unique experience.  It doesn’t matter if you practice dance, or music or act on stage or just go up and speak to an audience, but the very energy exchange that happens is something that I experienced and allowed myself to enjoy it thoroughly.  The continuous cycle of: the earth- your center - touch - partner and the earth is an amazing feeling . At the very beginning, it does take its time to come to terms with it as there is  the fear lurking inside that always creeps within that asks me  - Why am I allowing  someone to peek through a part of me or even why am I allowing this part to come out of me to either be witnessed by myself or through someone watching?  Have I exposed something or shared my vulnerabilities, that was just for me and my sensibilities?

Anyway once you begin to accept what you go through , there is something very beautiful that emerges from the  space – the emptiness and nothingness around that cannot be explained logically or intellectually.  From getting to know the earth, to ourselves, to partners and exploring the space through a dance that has no structure, no set rhythm, no set sound, no set time is fantastic and is something so fundamentally transforming that only when you experience it can you believe it. We are so used to the visual means of perceiving the world around that some of the things we did with our eyes closed gave us a whole new sense of  ‘sensation through the 5 senses’. The whole time you just allow your body to function like it has a mind of its own and allow it to take and receive, feel and listen rather than use language or words to express or allow your brain to respond and take control.

Here is the link to Shiv's full note on Facebook, if you would like to read more. 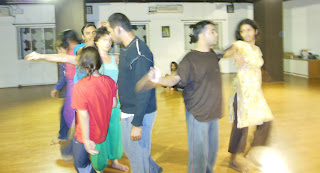 One thing that I cherish taking back from the classes is... beginning to appreciate and enjoy my sense of touch. Felt so connected to myself and the stranger because of the Touch. It inevitably brought a smile to my face… It showed to the city dancers... a different meaning of performance! Not just something you would do on a high rise stage in front of an audience as a formal presentation… 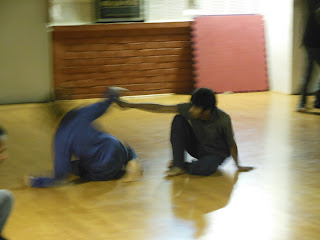 At the time of the workshop, Nakula Somana, who had organised it, was inaugurating the idea of a collective of dance and theatre practitioners to organise ongoing training in Bangalore.  He decided to call it “Fluid” because of what the word implies about both physical qualities and flexibility of structure.
In the Fluid Facebook group, Mafalda Mas Sangranichiny shared this:

Lucy May Constantini workshop, the beginning of Fluid? Most of us think that her workshop change us in many different ways.... in my case it was a revealing work, it gave me a new view of myself being myself.... 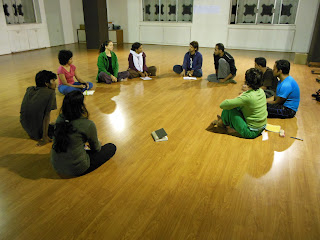 From Lucy May Constantini
with love, x
To know more about Lucy's adventures, please check out her blog : http://underthetrident.blogspot.in
Posted by Origins at 7:58 PM